Aart Jurriaanse wrote a number of compilations from the books of Alice A. Bailey and commentaries on the teachings. Among these are: Of Life and other worlds; Prophecies; Ponder on this; Serving Humanity; The Soul, the Quality of Life; The Seven Rays of Life. His compilations and his commentaries, in which he revealed his intimate knowledge of the Master Djwhal Khul’s teachings, were a colossal undertaking, and have proved an invaluable tool to students of the Ancient Wisdom Teachings.

Dozens of his articles are here: http://www.mindlight.info/AartJurriaanse/

666 -- and other misunderstandings by Peter Liefhebber
A look at common religious misconceptions regarding the awaited Teacher, sharing & the anti-Christ.

The Joy of Christ's Coming, by Howard Ray Carey
This book (a collection of 51 articles) builds important bridges between traditional Christianity and esotericism, as it draws back the veil from some of the Bible's most important events, parables, and teachings to reveal their powerful hidden meanings --- as relevant today as they were 2,000 years ago.

Howard Ray Carey was a Methodist ministe and a student of the esoteric teachings.

Link to page with several (~10) articles by BetteStockbauer

All of the material listed above (except for the Master Plan) has been published by Share International, a non-profit, non-governmental organization. SI is funded entirely by individual donations & proceeds from book & magazine sales. Proceeds from contributions and sales help finance the distribution of free literature in developing nations.

The Work of Master Djwhal Khul (the Tibetan) given through Alice A. Bailey

The Reappearance of the Christ

Before the soul can see, the harmony within must be attained, and fleshly eyes be rendered blind to all illusion.

Before the soul can hear, the image (Man)  has to become as deaf to roarings as to whispers, to cries of bellowing elephants as to the silvery buzzing of the golden fire-fly.

Before the soul can comprehend and may remember, she must unto the silent speaker be united, just as the form
to which the clay is modeled is first united with the potter's mind.

For then the soul will hear, and will remember.  And then to the inner ear will speak the voice of silence.

From: H.P. Blavatsky
The Voice of the Silence

There is no salvation surer than that through devotion. One can forgive much where there is unswerving devotion. The man who is devoted in heart can be relied upon. It is cause for rejoicing when Hierarchy is upheld by devotion. At present it is especially needed. If yesterday's confusion seemed enormous, what can one say of tomorrow's? I have already prepared you for the growth of Armageddon, and you know that the black wings of darkness will not withstand the Fiery Sword. Be not astonished�the Battle increases!   Fiery World I, 605. 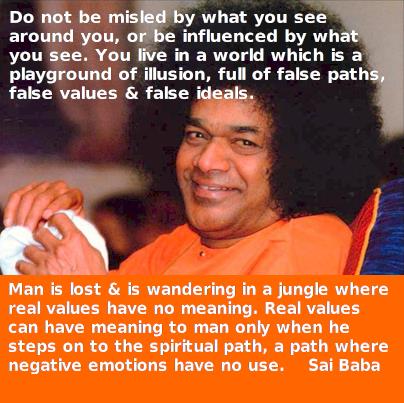 "The end of wisdom is freedom, the end of culture is perfection, the end of knowledge is love,
the end of education is character."

"Love more and more people, transform Love into Service, Service into Worship;
that is the highest spiritual practice."
Sai Baba 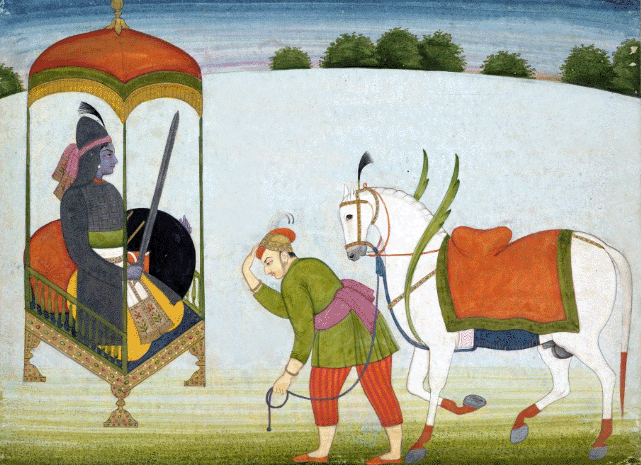 Kalki Avatar with the sword of cleavage

"In Hinduism, Kalki (Devanagari: कल्कि; meaning 'Eternity,' 'White Horse,' or 'Destroyer of Filth') is the final incarnation of Vishnu [Maitreya, the World Teacher] in the current Mahayuga, foretold to appear at the end of Kali Yuga [now!]...the Puranas foretell that Kalki will be atop a white horse with a drawn blazing sword. He is the harbinger of the end time in Hindu eschatology, after which he will usher in Satya Yuga [New Age]." Source: Wikipedia

"When Maitreya comes before the world there will begin for men a period of intense heart-searching and reflection. It is only to be expected that for many it will be a painful, even traumatic, one. So steeped in the ways and ideas of the past, so fearful of a future unknown and strange, are millions today, that men will want to take stock of the new situation which will then pertain…. When Maitreya first announces His plans and hopes for the rehabilitation of the world, His energy of Love – the Sword of Cleavage – will further delineate the divisions which now exist. Men will take sides – for or against the new principles that He will present for the betterment of all. Thus will it be. Thus will a period of discord and discontent precede the acceptance of the new. Gradually, however, even the least sanguine will acknowledge the need for a reconstructed world and add their weight to the task.

"There will begin a time unlike aught seen before on Earth. On every hand and at every level the changes will pursue their logical course, cementing in law and principle and form the aspirations of all. Thus will men regain a hold on their destiny and turn away for ever from the abyss. (The Master -- from ‘Coping with change’)
=========================================
The Sword of Cleavage is the energy of Love. As people respond to this energy the world will be divided – those who are clamouring for change along the lines Maitreya is advocating, and those who are fearful and looking to the past, who see Him as the Antichrist, are fearful and do not know what to do. They will stand aside and watch the events, and so lose the opportunity presented, for the first time in history, to take part in the transformation of the world. It is up to each individual, from where he or she stands, to assert their divinity. (Benjamin Creme, The Awakening of Humanity)
=========================================

"Much that is loved must go. Cling not to the old forms. Much will depend on man’s ability to renounce these outworn structures, and to create a new and simpler world. Remember this. Forget not that I come to change all things. My Coming brings peace. Likewise, My Presence brings cleavage. My Sword, that Love which I am, will separate all men, will show the True from the false, will clear the way for the New Light which I bring. May it be that you can withstand this change and accept My Light. (Maitreya, from Message No.74)

Source/read more:
The Sword of Cleavage: selection of quotations on the theme of ‘The Sword of Cleavage’ from Maitreya's Messages & Teachings, the Master --, and Benjamin Creme’s writings.
http://www.share-international.org/…/old_i…/2011/2011-10.htm

-- the selection of quotations is after the letters to the editor. 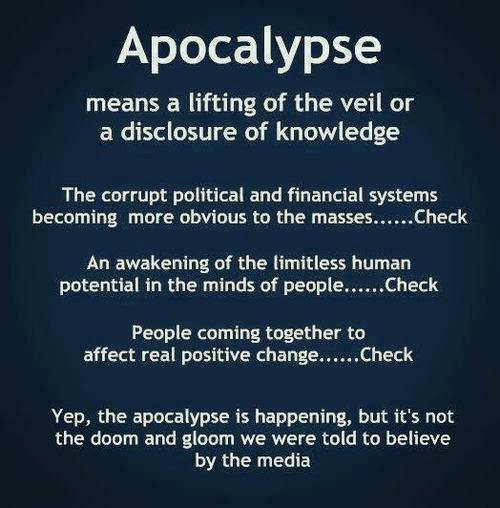 In an interview with the German author Peter Andreas, the scientist Prof. G. Quispel expresses his amazement that the demonstrably wrong ideas on this subject have not been abandoned:

"I am constantly astonished to see that people still do not appear to know what has been recognized for one and a half centuries: that the beast from the Apocalypse refers to none other than the Caesar, Nero. Only the later Christian church, in the time of Constantine (325 AD), put the Apocalypse into a future, historical time-frame." (From: Was Morgenwahr sein kann, Econ Verlag)
Source: 666 -- and other misunderstandings
http://www.share-international.org/archives/agelesswisdom/aw_pl666.htm 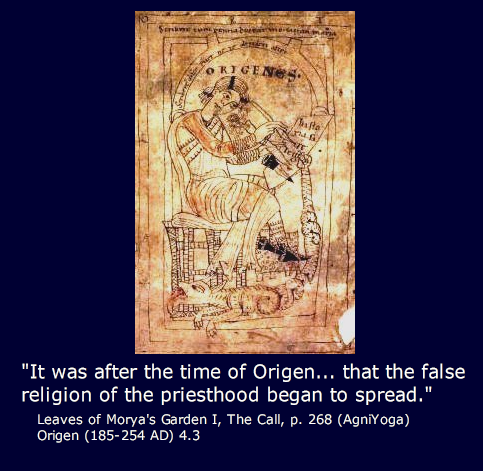 "The problems confronting us should be faced with courage, with truth, and understanding,  as well as with the willingness to speak factually, with simplicity and with love,  in the effort to expose the truth and clarify the problems which must be solved.
The opposing forces...must be routed..."   The Tibetan

The Reappearance of the Christ: http://www.youtube.com/watch?v=vSOG2LyYXqE

"Almost anything you do [to help humanity] will seem insignificant,
but it's very important that you do it."
Mahatma Gandhi

Disclaimer:
As a non-profit, educational, private initiative the mindlight.info website, while very grateful for their Great Work, is not affiliated with the Theosophical Society, Lucis Trust, Alice Bailey, the Tibetan, Agni  Yogi Foundation, Helena Roerich, H.P. Blavatsky, George Adamski, Benjamin Creme, Share International, Peter Liefhebber, Sai Baba, Bette Stockbauer,  Howard Ray Carey, & others quoted on this domain. Quoted texts are the intellectual property of the copyright holders. For the latest news on the emergence of Maitreya & the Masters of Wisdom, see the SI web site:  http://www.share-international.org